Idea owners are those who are assigned to partly manage selective ideas that are assigned to them by the community administrator. Multiple owners can be assigned to a single idea. This section is a part of Advanced settings. 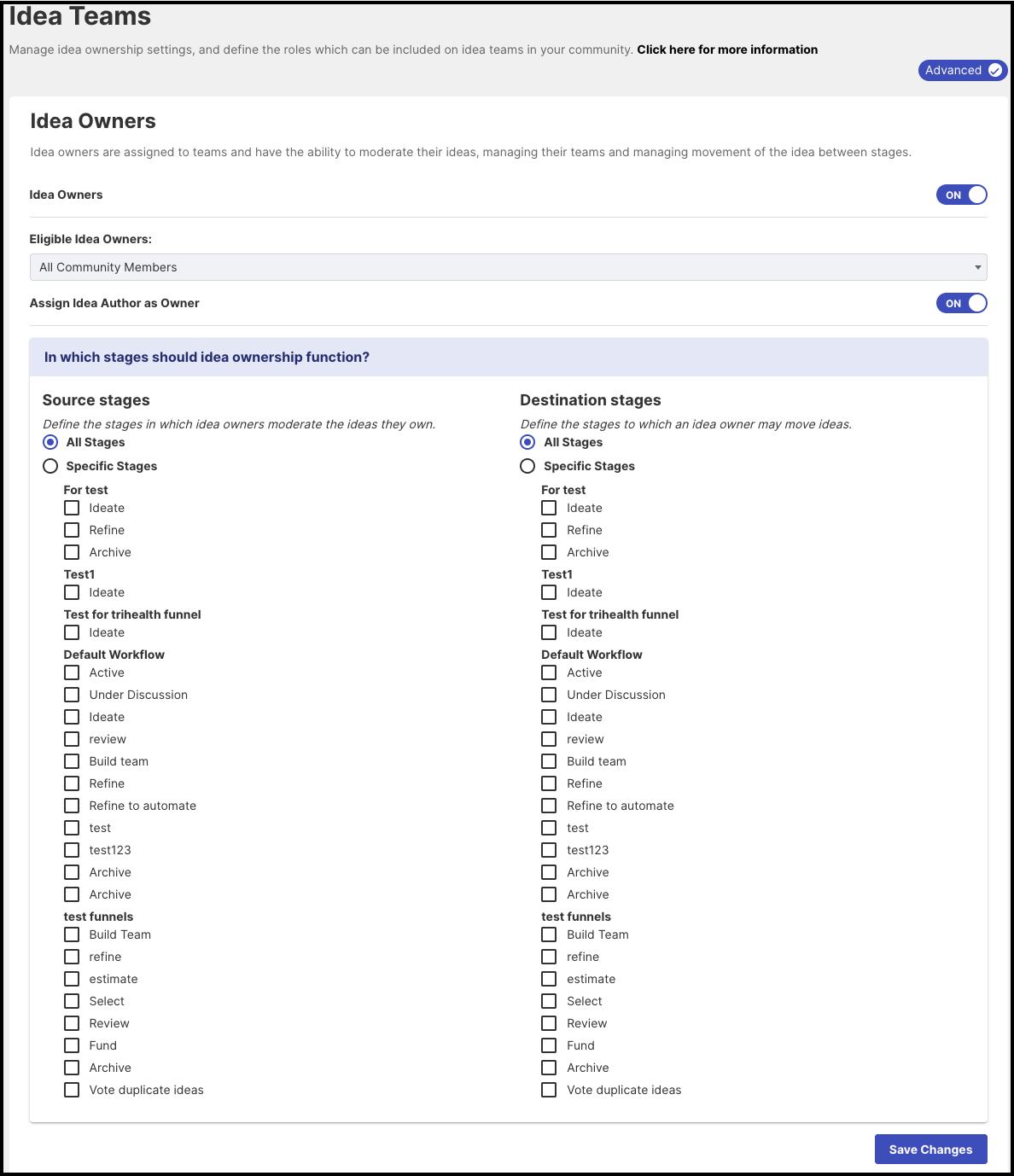 When the idea author is not chosen to be the default idea owner, administrators or moderators can assign idea owners to an idea from the home page. They can see a clipboard icon under the description of an idea.

Simply type in the first two characters of the member you would like to assign as Idea Owner and select the names. The moderators can also add a message for them if desired. 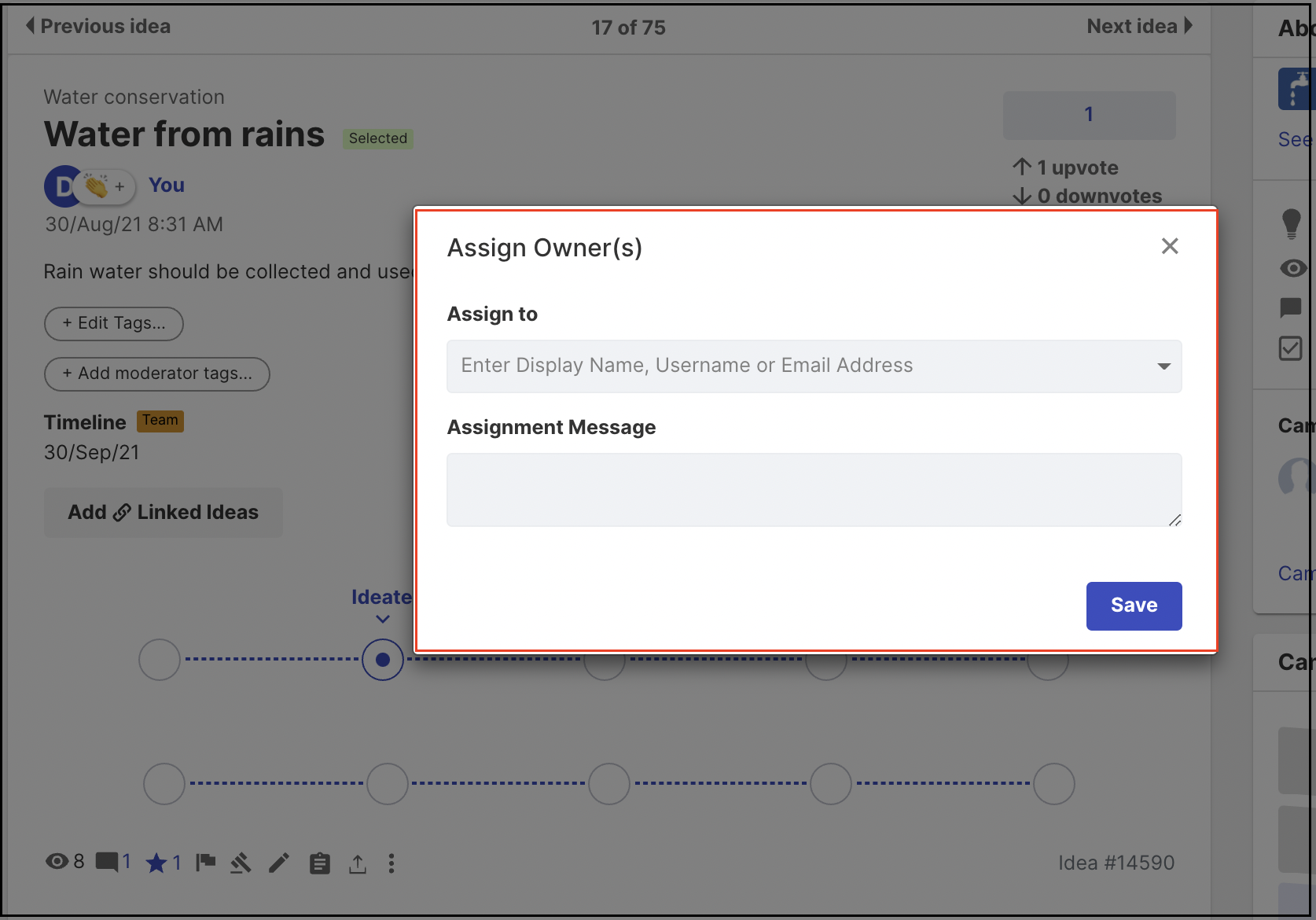 The assigned idea owners receive an email stating that he/she has been assigned as an owner of the idea. It also includes the assignment message. 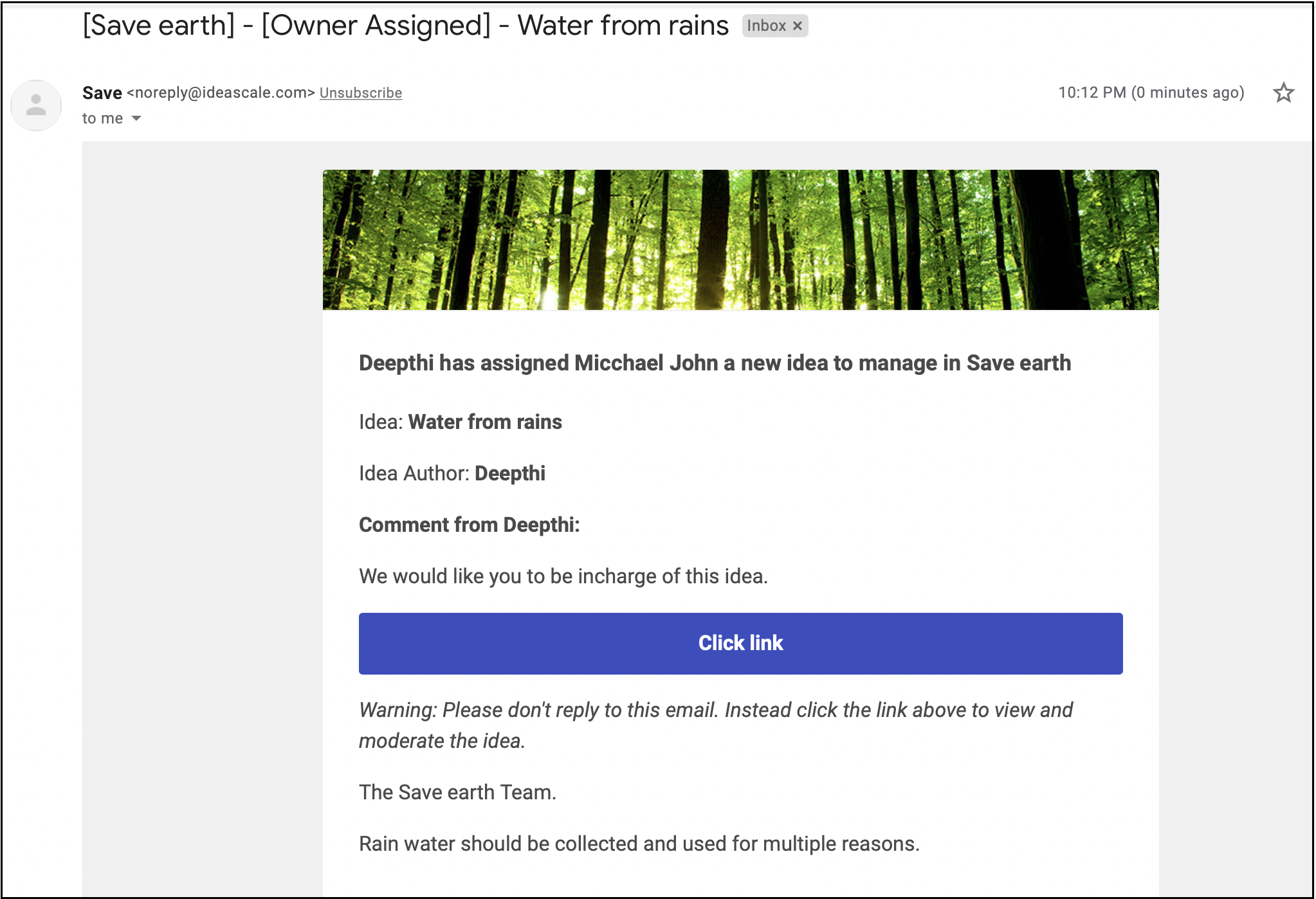 To make it simpler for the idea owners to manage their assigned ideas, the members can access all their owned ideas from My Ideas Tab.

The members who are assigned as idea owners will see the ideas they own under the tab My Ideas >> My owned Ideas as shown below. The ideas are displayed as per the dates they were submitted. 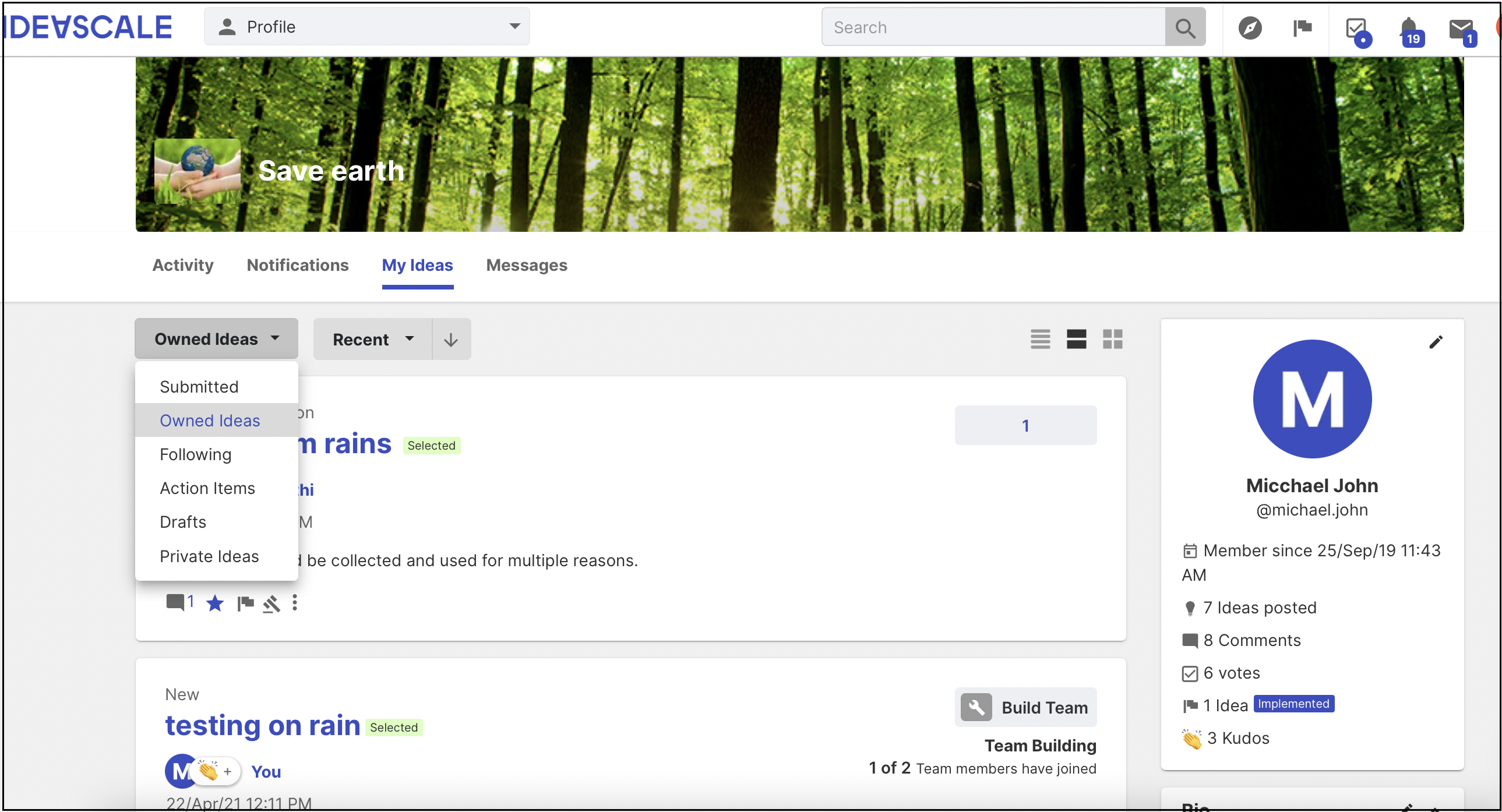 The assigned idea owners have the right to change stages and edit the ideas to which they are assigned. Though they do not have any other moderation privileges in the community.

Idea owners can change the stages of their assigned ideas from the homepage as well as the idea detail page.

1. Homepage (Grid view): Clicking on the Moderate Idea (Hammer sign) will show the stages to which the idea can be assigned by the idea owner. 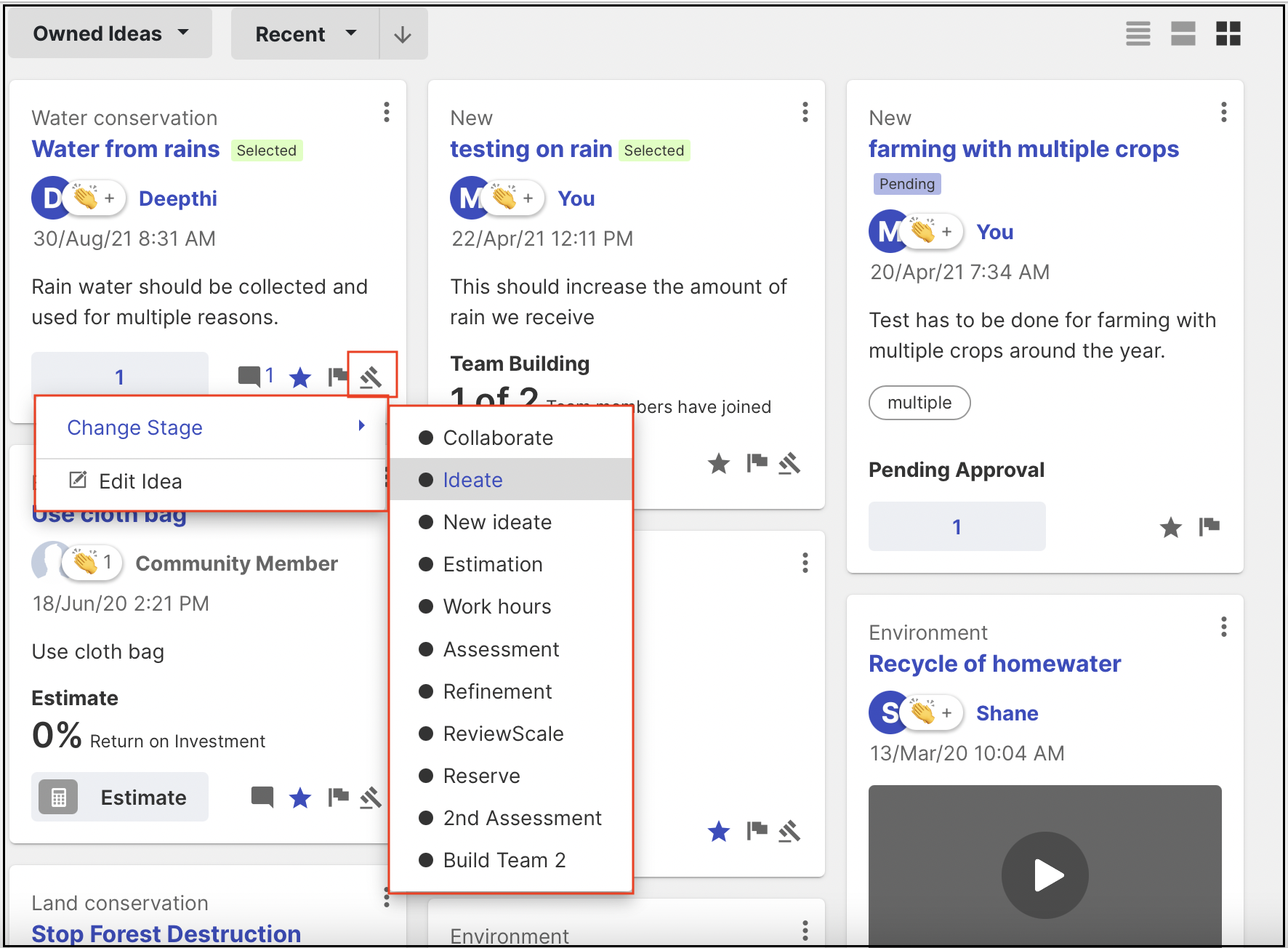 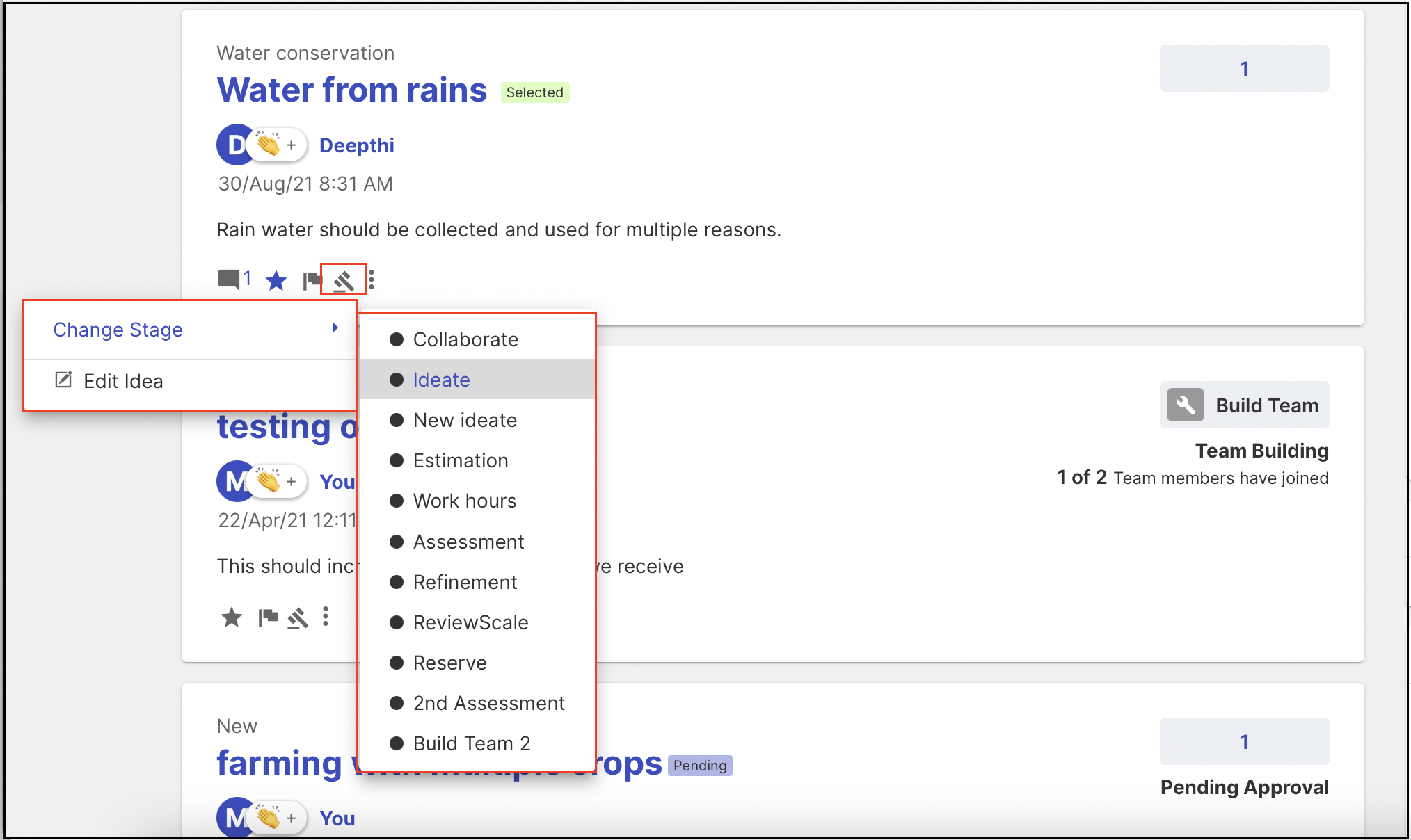 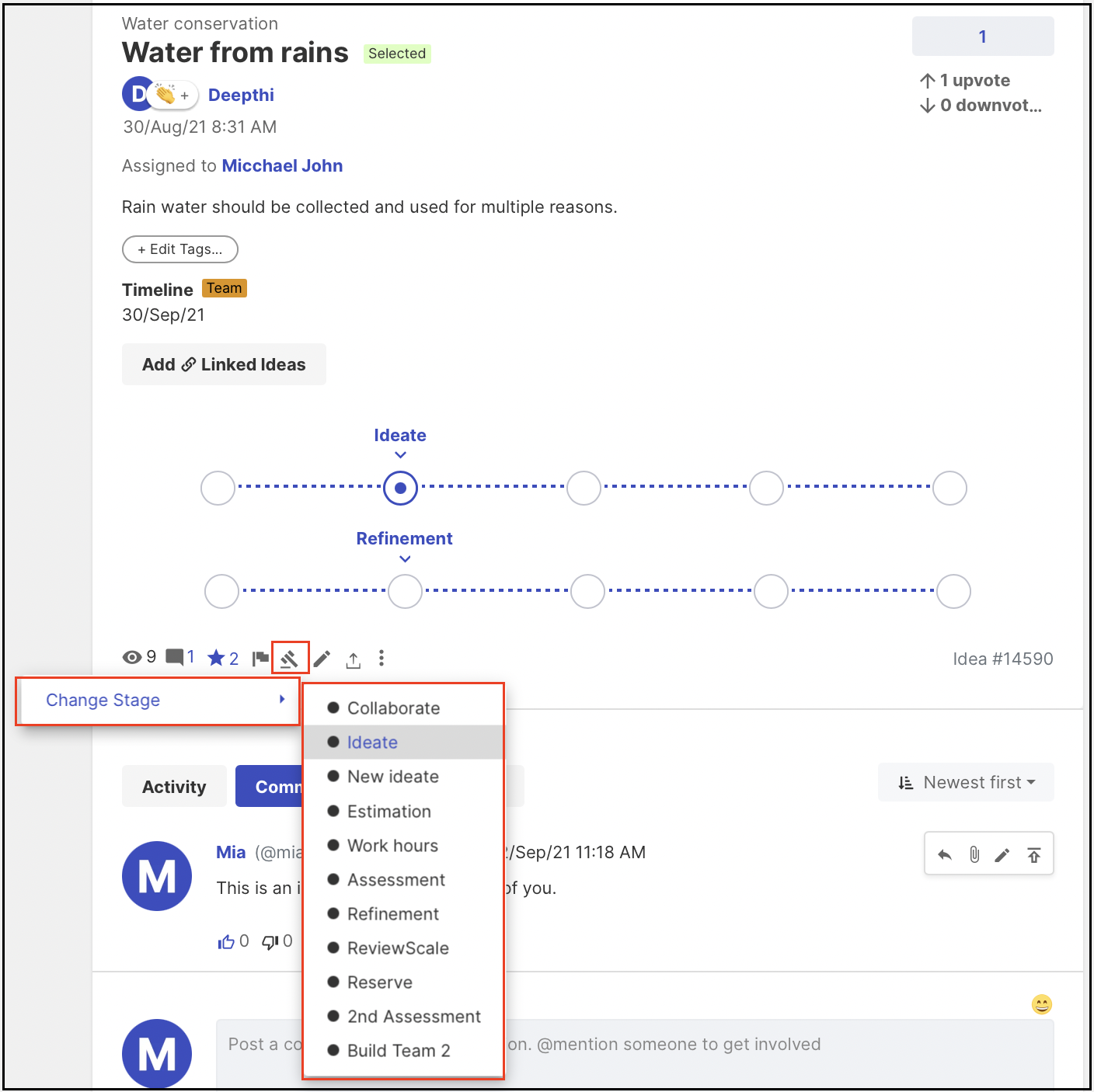 Idea Owners are allowed to edit ideas in specified stages where they are permitted to operate using the Edit option from the dropdown of 'Moderate Idea' in the Home page (List or Grid) view.

On the Idea Details page, the edit option (pencil icon) will appear besides Moderate idea (hammer icon). The screenshot is added here as a reference. 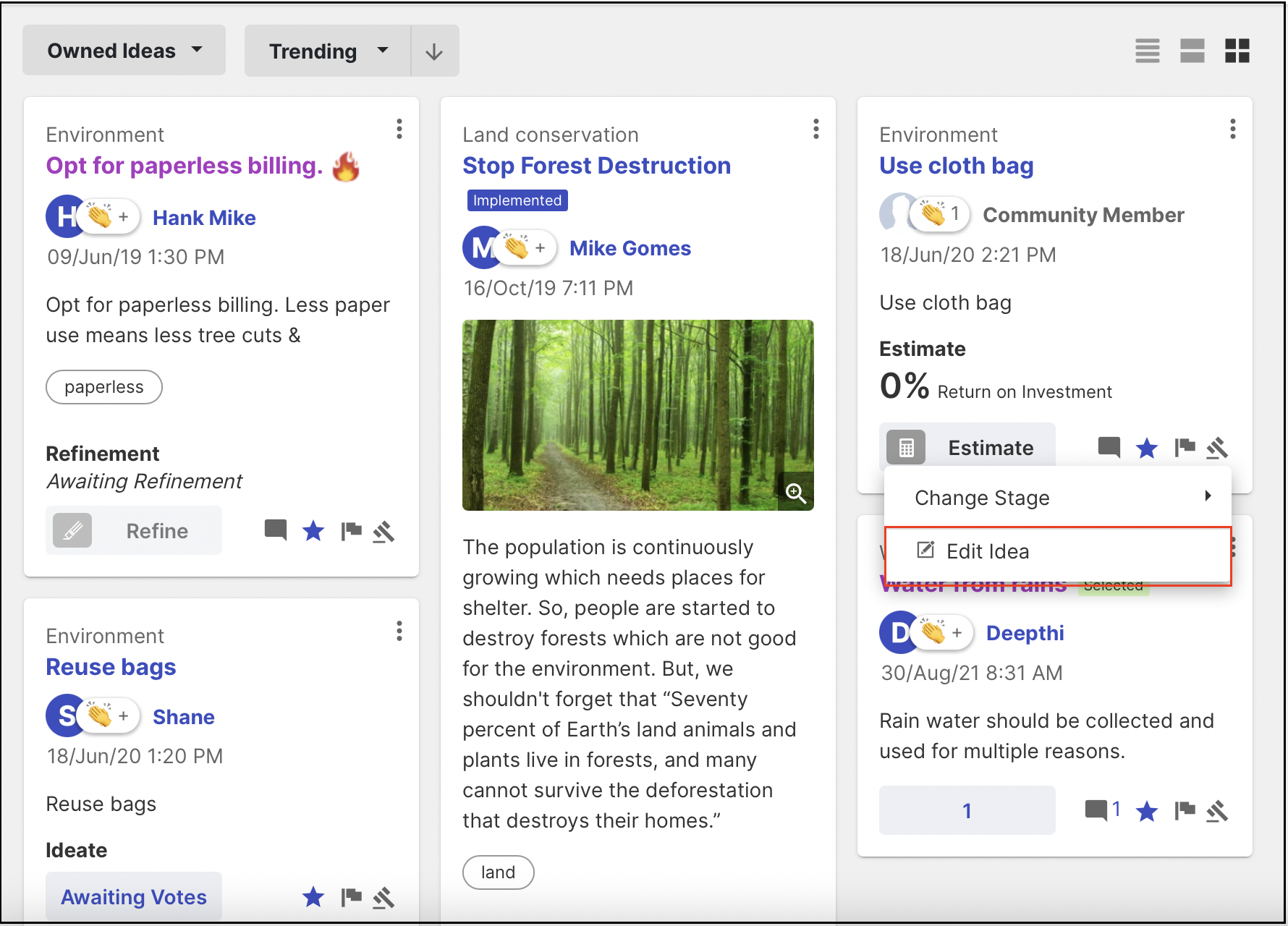 Moderators of the community can change the idea owner from 3 places:

From the homepage grid view:

Click on the 'More' option (3 dots). The dropdown will show the Change owner option.

From the Idea Detail Page:
The clipboard icon

The members assigned as Idea Owners automatically become the Followers of the idea, even though they have not voluntarily clicked on the "Follow" idea button. They will also have moderation rights over the Idea Teams.

Clicking on the Owner Group link on the idea detail page shows the list of selected Idea Owners. 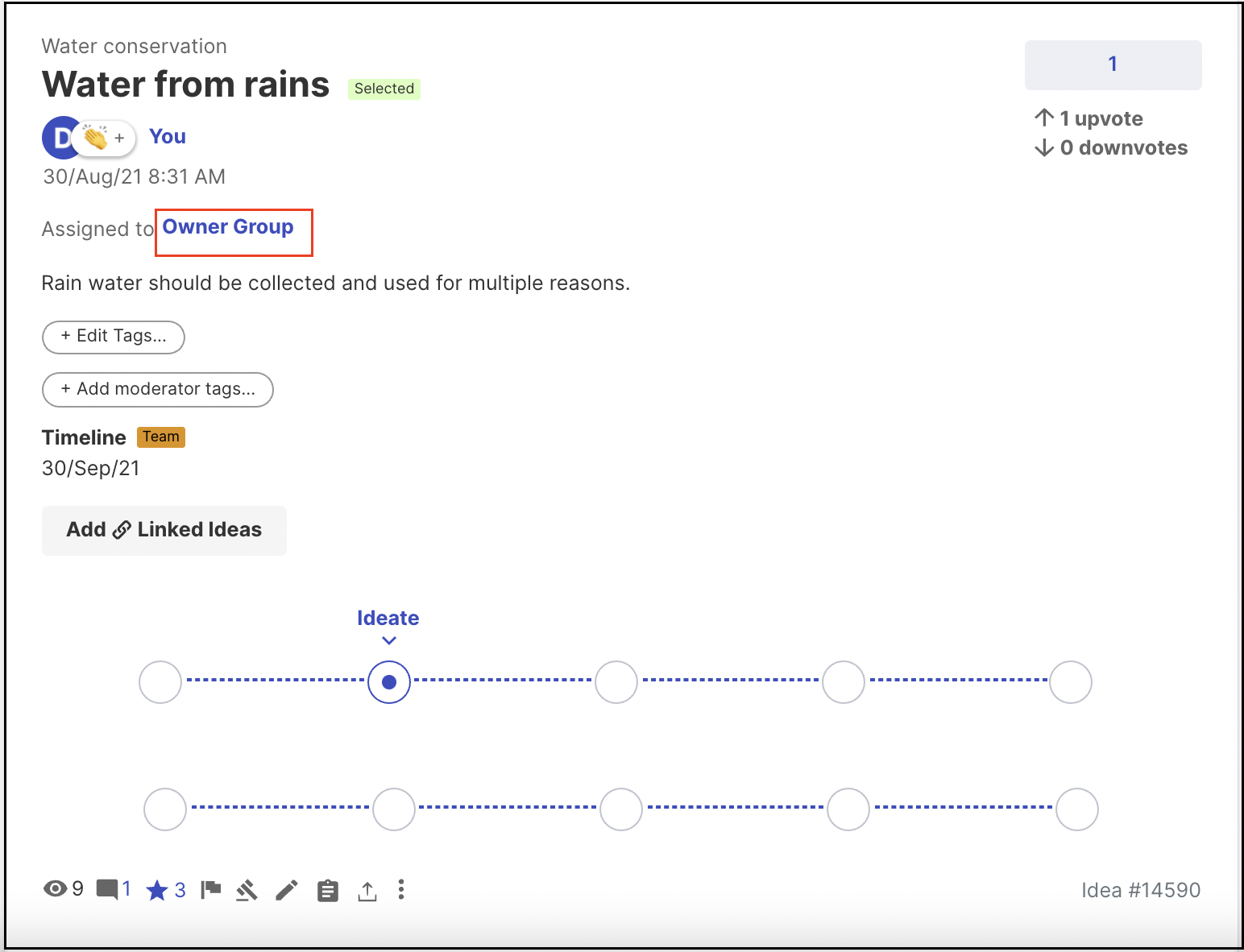 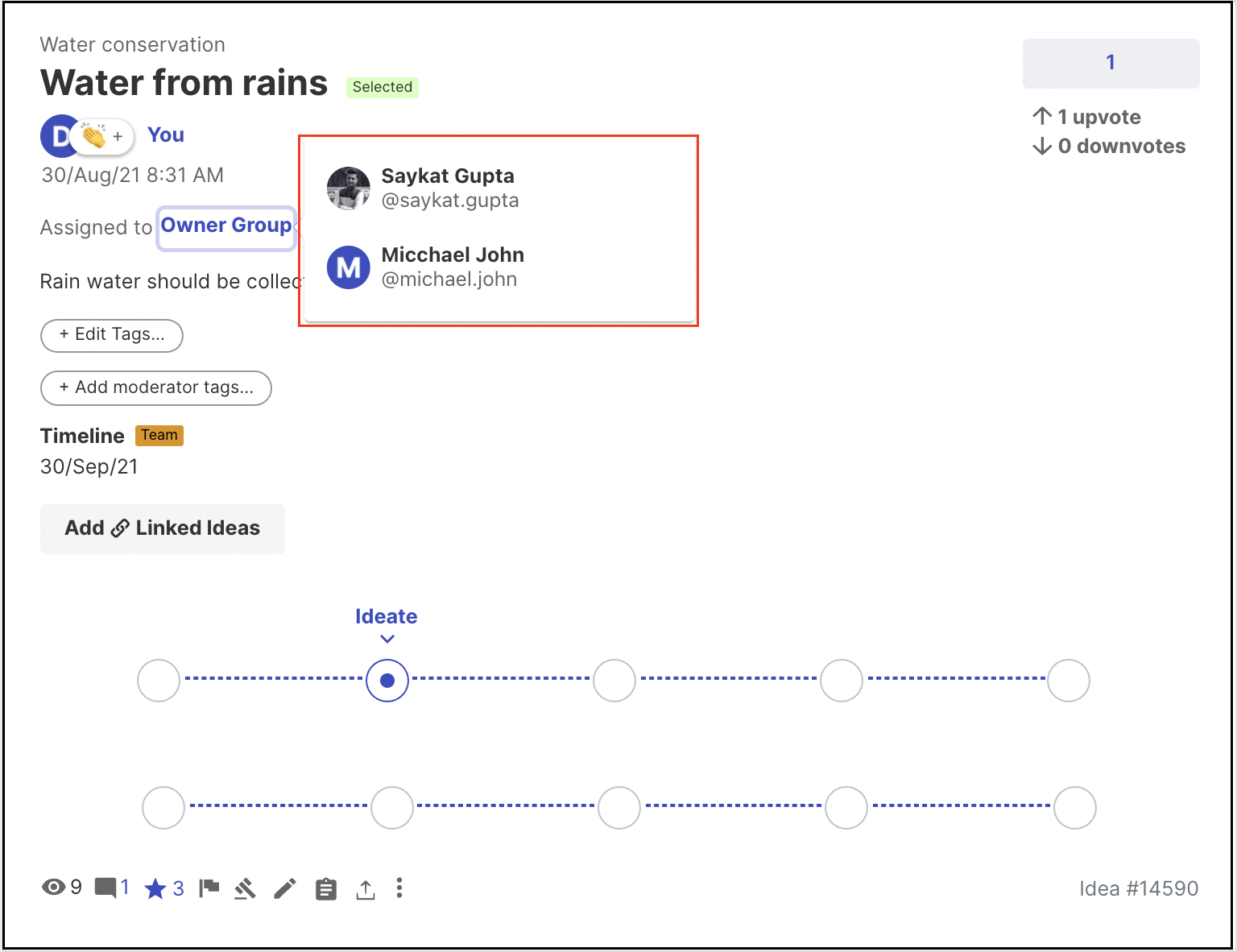 Assigned Idea Owners can change idea status to the desired level as set by the administrator.

In a community where moderation is set for new ideas, the Idea Owners do not have the right to change the status from Pending Approval as they have to wait for the Moderators Approval before the idea becomes available to them.

If the Idea Owner also happens to be a Global Moderator or a Campaign Moderator, they have all the default Moderation rights.